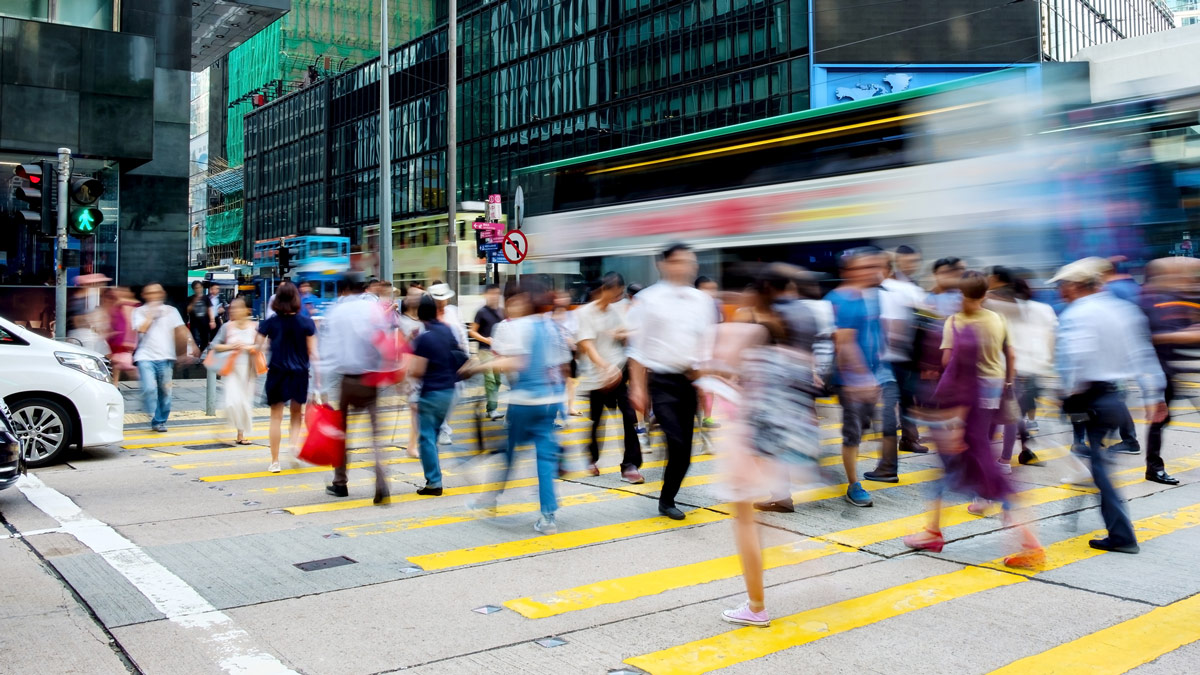 Aimsun Next 20 focuses on modeling pedestrians, bicycles and the interaction between passengers and public transport vehicles – this is a huge step towards our final goal of modeling individuals and multimodal mobility.

Scroll down for a quick guide to the main highlights in Aimsun Next 20, followed by a breakdown of all enhancements and new features.

All users whose Software Update Subscription (SUS) is valid in or after April 2020 can download and install Aimsun Next 20.

If you want to update your SUS, contact us now at at info@aimsun.com.

Aimsun Next 20 is focused on modeling people and how they move around the city, particularly walking, riding bicycles and using public transportation. Some of the top new features are:

Additional stopping criteria for DUE

Aimsun Next 20 also includes improvements that we previously released as Fast Track features in version 8.4:

All New Features in Aimsun Next 20

We have developed a new pedestrian simulator to be used within a microscopic simulation. It doesn’t replace Legion for Aimsun, but the two simulators are complementary and serve different use cases.

Our new in-house Aimsun Next pedestrian simulator targets mobility engineers: it is designed to model the movement of pedestrians on sidewalks, the interaction between pedestrians and traffic at crosswalks, and the boarding and alighting process at public transport stops. The focus is on ease of use, speed, multi-platform support and deep integration with the Aimsun Next platform to extend the mobility modeling workflow (for example the possibility of using Dynamic Public Transport Assignment to get skims for the four-step model).

Legion for Aimsun targets pedestrian engineers working with OpenBuildings Station Designer and LEGION Simulator: it is designed to model the interaction between pedestrians and traffic around pedestrian facilities ranging from stations to sport venues, and the activities of pedestrians inside those facilities, including the use of escalators, elevators, turnstiles, vending machines and so on.

If you used Legion for Aimsun Base in the past (or Lite or Extra only because of the higher pedestrian demand they support), you will likely want to use the Aimsun Next pedestrian simulator now. Why? Not only does it support everything that you could do before, but it has no limit on the number of pedestrians, it also runs in Mac and Linux, it’s faster and it doesn’t require a separate license. Editing is also quicker, as you no longer have to create obstacles around the road sections and the buildings imported from OpenStreetMap, because pedestrians automatically recognise those objects as non-accessible space. And if you have models already built for Legion for Aimsun, the new pedestrian simulation can run them with no modifications.

If you used Legion for Aimsun Lite or Extra to create service points, or in combination with Legion SpaceWorks to model the interior of facilities, Legion for Aimsun should remain your choice, as the new Aimsun Next pedestrian simulator doesn’t support these functionalities.

Dynamic Public Transport Assignment gives pedestrians the option to take public transport to reach their destination. The choice is based on comparing the generalized cost of walking to the destination with the generalized cost of walking to a public transport stop, waiting, paying a fare, traveling on board, making transfers, and walking from the last stop to the destination.

You can use this feature to build more comprehensive pedestrian models, or to calculate dynamic skims for public transport that can be fed back into the distribution and modal split stages of the strategic model.

We have introduced a new microscopic car-following model capable of modeling the lateral and longitudinal movement of vehicles that don’t follow the lane markings. It is designed to model the behavior of motorised vehicles in regions that have no lane discipline at all, or of two-wheel vehicles like bicycles and motorbikes in regions where they are permitted to travel in parallel in the same lane and to filter through a queue of four-wheel vehicles.

Since non-lane-based behavior can be activated by vehicle type and by section, you can model a wide range of situations, from bike lanes in which bicycles overtake other bicycles travelling in the same direction, to advanced stop lines at a signalised intersection for motorbikes that pass between queued vehicles. You could even model a case where all traffic occupies the entire width of the road regardless of the marked lanes, either at a specific location or throughout the network.

We have implemented the car-following models developed by the PATH research group at UC Berkeley to reproduce the speed profiles of vehicles equipped with ACC and CACC.

We’ve replaced the yellow box speed with a checkbox that enables/disables yellow box behavior for each turn.

Show yellow in the red-to-green transition in traffic lights

When switching a traffic light from red to green, you can specify an intermediate yellow time.

When choosing which lane to use, vehicles now evaluate the conditions on the closest optionally reserved lane, even if it is not adjacent to their current lane. This for example models more realistically the behavior of HOV vehicles on a multi-lane highway with an HOV Lane.

Spacing and clearance time series for individual vehicles in micro

Now you can add a new Loop Controller to the four-step experiment diagram for when you want to iterate certain steps such as distribution and modal split, until you reach the stopping criteria. 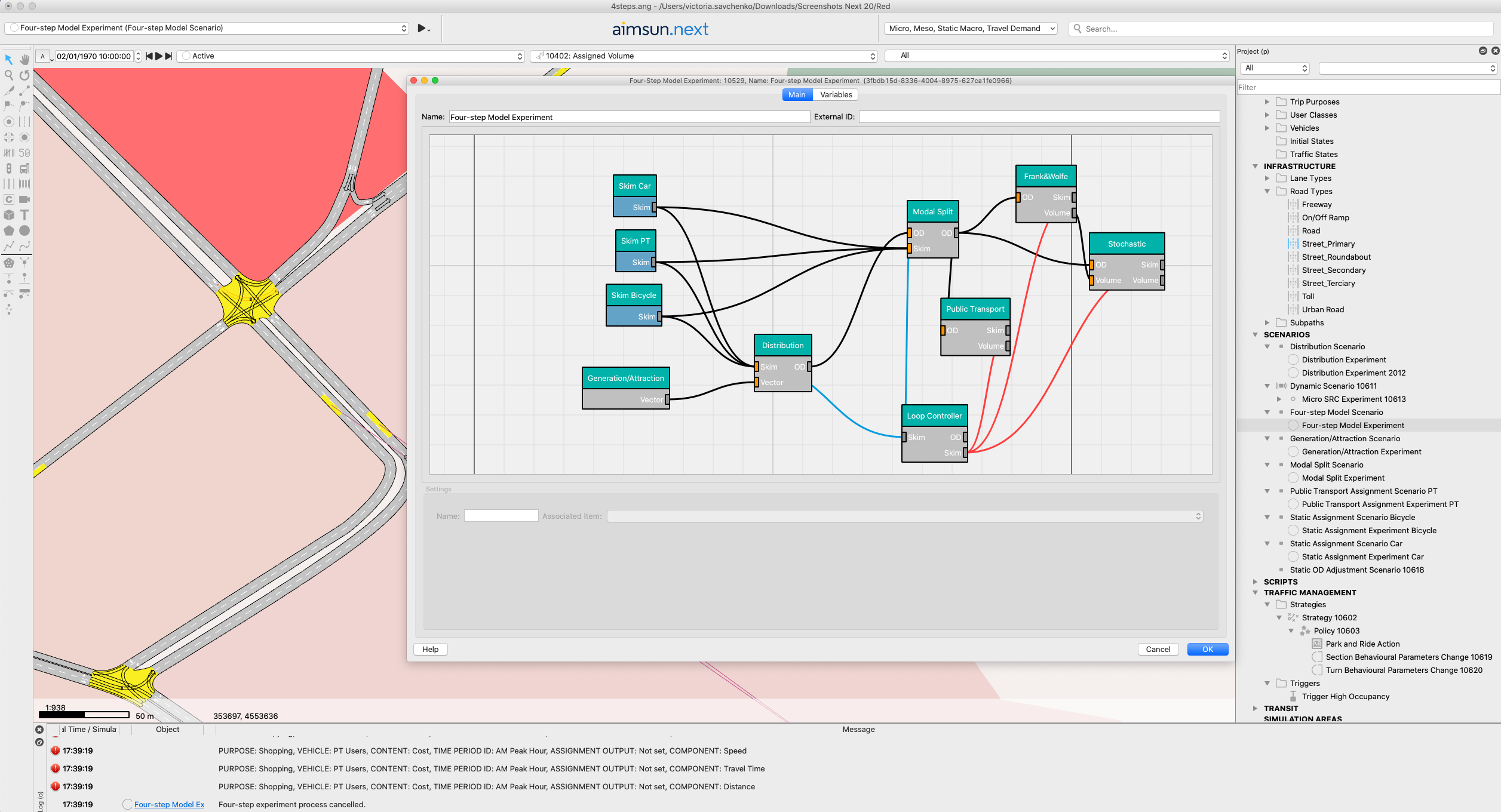 The static traversal calculation now computes the public transport schedule by taking into account the travel time from the beginning of the line to the boundary of the subnetwork, evaluated according to the cumulative value of the VDF/TPF/JDFs cost or of a function component.

The Hybrid Macro/Meso Simulator is a new event-based simulator that generates individual vehicles and moves them by applying the mesoscopic behavioral models inside mesoscopic areas, and by estimating a travel time using the VDF/TPF/JDF functions, or a function component, outside of those areas. Aimsun Next calculates the paths by applying Dynamic Traffic Assignment (Stochastic Route Choice or Dynamic User Equilibrium) to the entire model.

This modeling approach allows you to extend the scope of a mesoscopic model to capture exterior rerouting effects without too many compromises on the runtime or the calibration effort.

Additional convergence criteria for DUE experiments

Now you can select the DTA cost functions (K-initials, initial and dynamic cost functions) applied to the last section before reaching a destination centroid.

User-defined costs for turns in DTA

Now you can define user-defined costs for turns, not just for sections. This way you can penalise specific manoeuvres.

Use the new Function Components to obtain extra outputs from dynamic traffic simulations.

You can now create traffic management actions to modify the main behavioral parameters of sections and turns during a micro, meso or hybrid simulation. This makes it easier to calibrate scenarios where the congestion level at a certain location varies during the modelled period and therefore vehicles are observed to change their behavior, for example, in terms of look-ahead or lane-changing cooperation.

You can now apply a Speed Reduction action to turns. This can be used, for example, to set different turning speeds for different vehicle types.

Minimum section coverage to allow for a detection point

You can set the Detector Lane Coverage Threshold to determine the percentage of lanes in a section that a detector or detector station should cover in order to be included in the adjustment process. This affects Static OD Adjustment, Static OD Departure Adjustment and Dynamic OD Adjustment. Previous versions use a hardcoded value of 60%.

Now the static OD adjustment can stop the iterations when the linear regression between assigned volumes and counts reaches a target R^2 and a target slope. In previous versions the number of adjustment iterations was fixed and predefined.

You can run a Dynamic OD Adjustment in combination with a DUE assignment, though we still manually iterate between a DUE assignment and an adjustment with a one-shot assignment that just performs a network loading on the input DUE paths – this way you can detect gridlocks earlier, stop the process and calibrate vehicle behavior.

Reference for elasticity and demand bounds

An interface with the Intelligent Transport System (ITS) platform STREAMS by Transmax is available upon request. The interface can be used to train system operators by connecting it to a microscopic simulation. Note that the STREAMS system cannot run faster than real time, so this forces the simulation to run at real time.

A new column in the Detectors table helps you select whether the detector is configured as SPIP.

Aimsun Next now automatically arranges the files of any new project (model document, backgrounds, real data, paths, outputs, etc.) in a fixed folder structure to facilitate the creation of backups and deliveries. This new folder structure also applies to tutorials; after selecting whether to open the initial or the final network, select the folder where you want to create the project folder structure and save the tutorial network.

The many benefits include: using the paths calculated with multiple static assignments for different time periods within a single dynamic simulation; combining the paths of multiple DUEs in order to run a longer one-shot simulation; or running a simulation that just covers a portion of the period covered by a previously calculated path assignment.

The Real Data Set Consistency Checker tool can apply several consistency checks based on flow, speed and occupancy (if available) to either detectors or stations.

UI in German and Polish

The Aimsun Next user interface can now display all menus and messages in two additional languages: German and Polish. 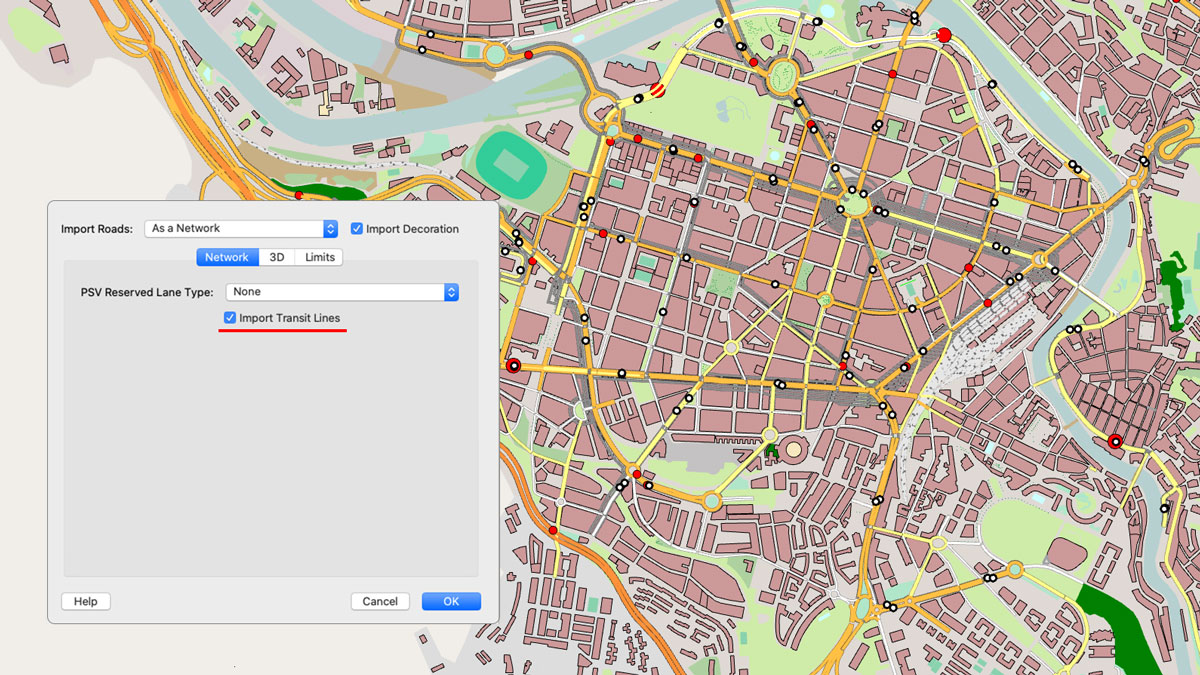 The API changes are listed in close detail in the manual, but they include:

The default Aimsun Next installer supports Python 3. A Python 2-compatible installer is also available on request to ease the transition.

Quasi-Dynamic Network Loading was a post-process of a static macro assignment that calculated vertical queues based on link capacities.

We have discontinued this functionality as it is no faster than meso and suffers from the same problems that affect macroscopic non lane-based models, that is, the capacity of a turn doesn’t depend on conflicting flows, and queues caused by a turning movement block the entire road section.

If you need to perform a capacity-constrained assignment, use the mesoscopic simulator instead.