Aimsun Next software allows you to model transportation networks small and large: from a single intersection to an entire region.

You can use Next software to build a digital twin of a city or highway, then simulate the trips that people want to make, and match them with the available transportation options such as taxis, buses, car-shares, bikes or even walking.

Digital modeling is a safe and cost-effective way to experiment with different designs or operations plans and help make places safer, cleaner and more liveable.

Over 7000 professionals in 87 countries around the world use Next software to make important decisions about the future of our cities.

Aimsun Next allows you to carry out traffic operations assessments of any scale and complexity. The applications are endless but some of the most common are:

The Aimsun Next UI is available in: 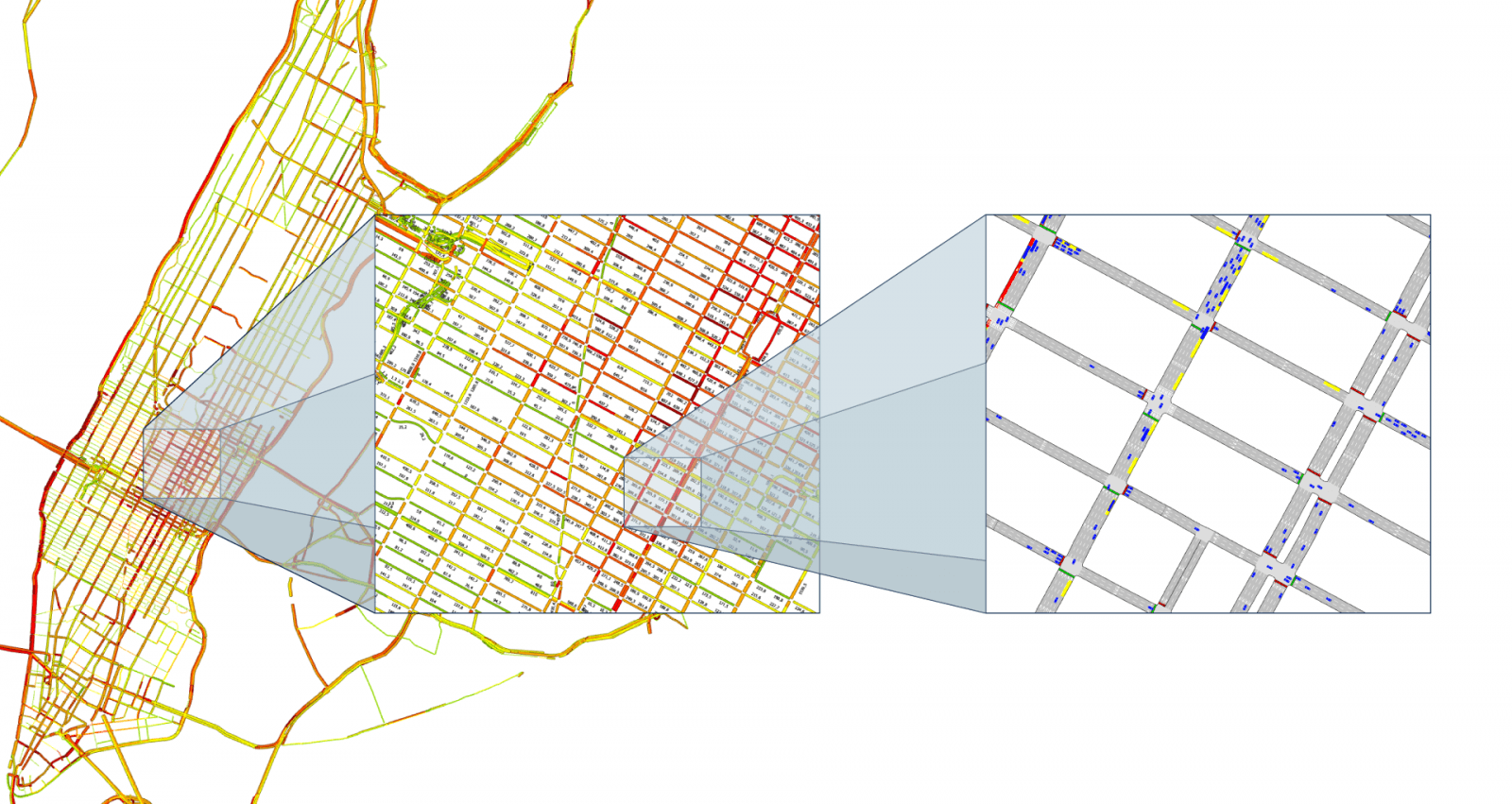 Aimsun Next has grown from a microsimulator to a fully integrated application that now fuses microsimulation (including a pedestrian simulator), mesoscopic simulation, macroscopic functionalities, travel demand modeling and even two hybrid simulators (macro-meso and micro-meso) – all within a single software application.

The two hybrid simulators give you simultaneous micro-meso or macro-meso simulation, allowing you the scope of super large-scale models while only applying detailed simulation where you really need it. This offers a best-of-both-worlds scenario of fast run times, low calibration effort and accurate detail.

The meso-micro simulator features the following:

The addition of four-step demand modeling is yet another step towards true integration: you can start a transportation modeling project from scratch, entering raw geographical and socio-economic data and follow the process all the way through to simulation without having to use a separate package.

No more interfacing with external traffic demand models for importing data as a starting point or as a means of redistributing demand from one mode to another or to estimate the impact that capacity changes have on overall demand levels.

The Aimsun Next user interface ticks as many boxes as possible on your wish list:

One of Aimsun Next’s most outstanding features is its speed: our microscopic simulator is the fastest on the market by far and the finest microsimulation tool available in the world for large-scale projects.

Multithreaded software architecture speeds up the simulation process to such an extent that it completely redefines what can be included in a dynamic model, be that a major city or a large and complex highway network.

Even on a laptop, the Aimsun Next microsimulator can run a model of the whole of Singapore with 10,580 intersections and 4,483 km of lanes 2-3 times faster than real time. 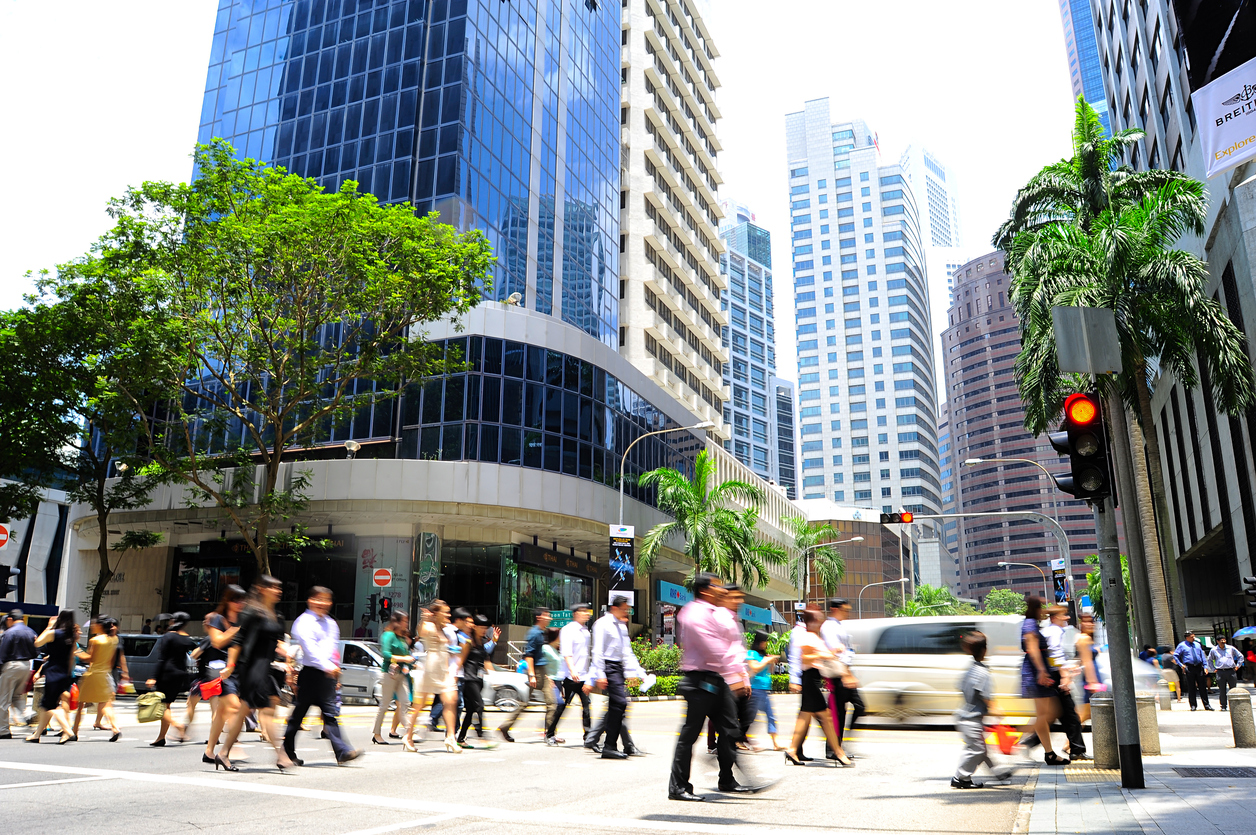 It’s not just our microsimulator that’s fast – the speed of the mesoscopic simulator has enabled our users to build some of the world’s largest dynamic models in Montreal, Toronto and New York City.

Dynamic user equilibrium (DUE) techniques and stochastic/discrete route choice models are both available in Aimsun Next in combination with either mesoscopic or microscopic modeling. This framework gives you the unrivalled flexibility of modeling recurring and non-recurring conditions at the appropriate level of accuracy. But it doesn’t stop there: by reusing previously obtained static or dynamic equilibrium assignment routes in a new simulation and combining them with discrete route choice, Aimsun Next users are able to reproduce the blend of habitual driving and on-the-fly congestion avoidance that occurs in reality. The result? The tools for reproducing the most realistic representation possible of route choice behavior under any conditions.

In addition, Aimsun Next’s rich traffic management framework allows you to model network operations that may have an impact on route choice: 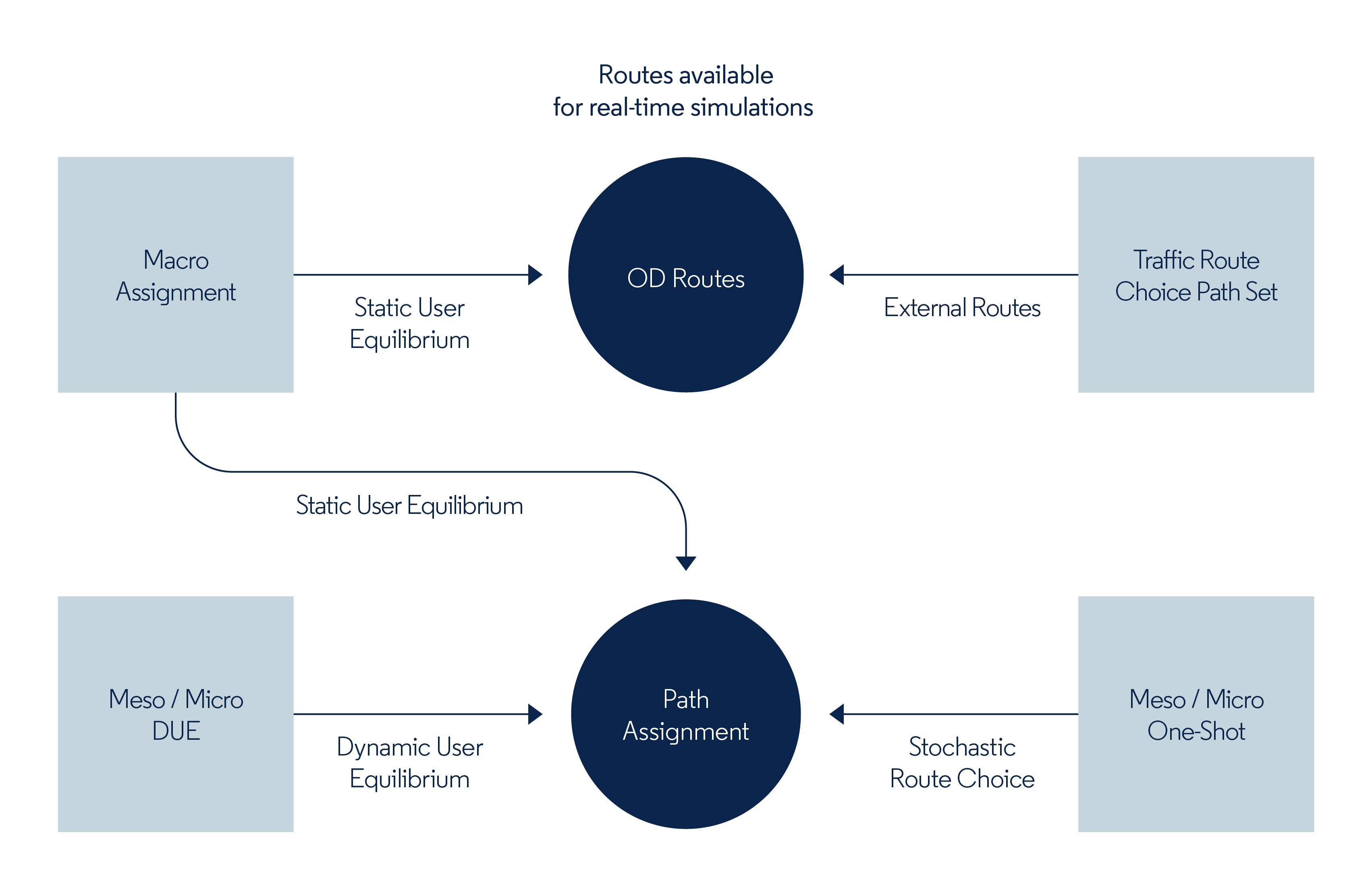 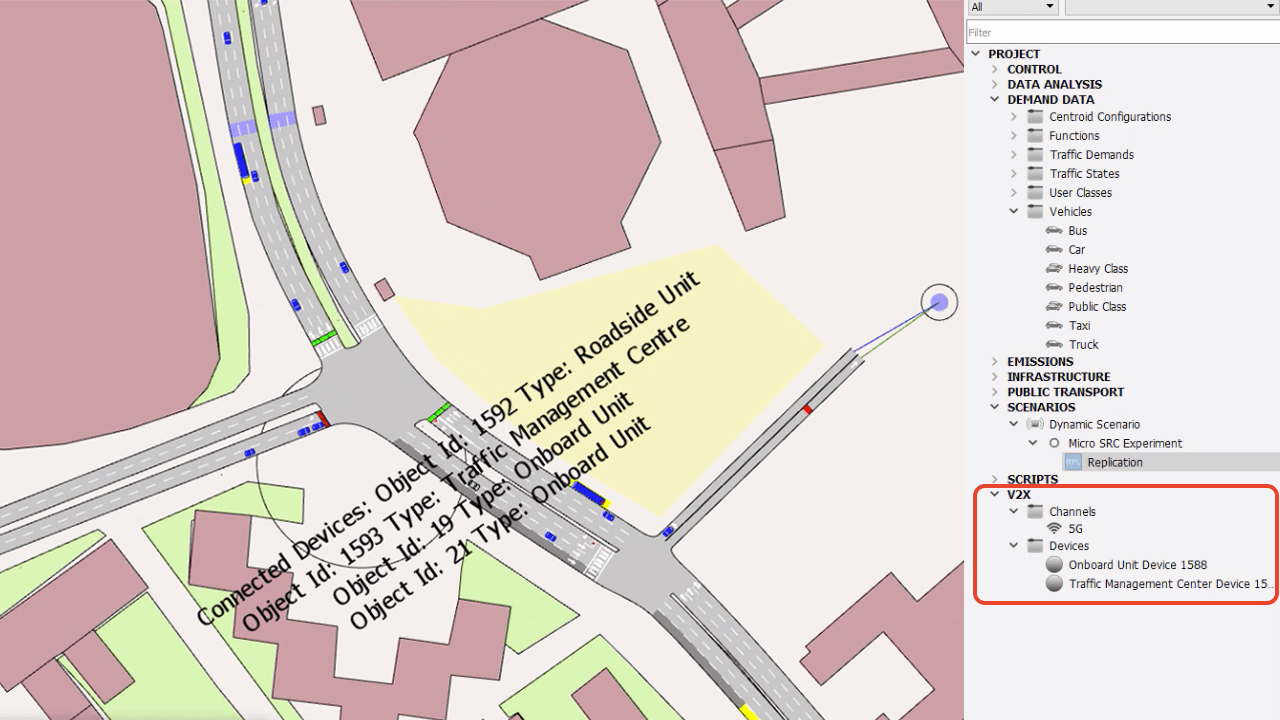 Connected and autonomous vehicles have different decision-making behavior from normal vehicles in the traffic network.

All the decision-making parameters can be varied by vehicle type to enable a modeler to make assumptions on how different technologies affect the driving behavior and study their effect on the network and on the other vehicles in the network.

Where the decision-making is more complex than can be represented by parameter changes, the External Agent Interface (EAI) is designed to introduce into a microscopic simulation a vehicle guided by a full autonomous vehicle controller implemented in a separate application, such as Simcenter Prescan.

The Driving Simulation Interface is a fully supported and redesigned TCP/IP connection between SCANeR and Aimsun Next. This interface allows a choice between ‘traditional’ driving simulator applications, where a human driver sits down at a console and controls a vehicle within a microscopic simulation, or an automotive simulator, which bypasses the human element entirely and creates in SCANeR virtual sensors and an autonomy stack to take control of a vehicle. 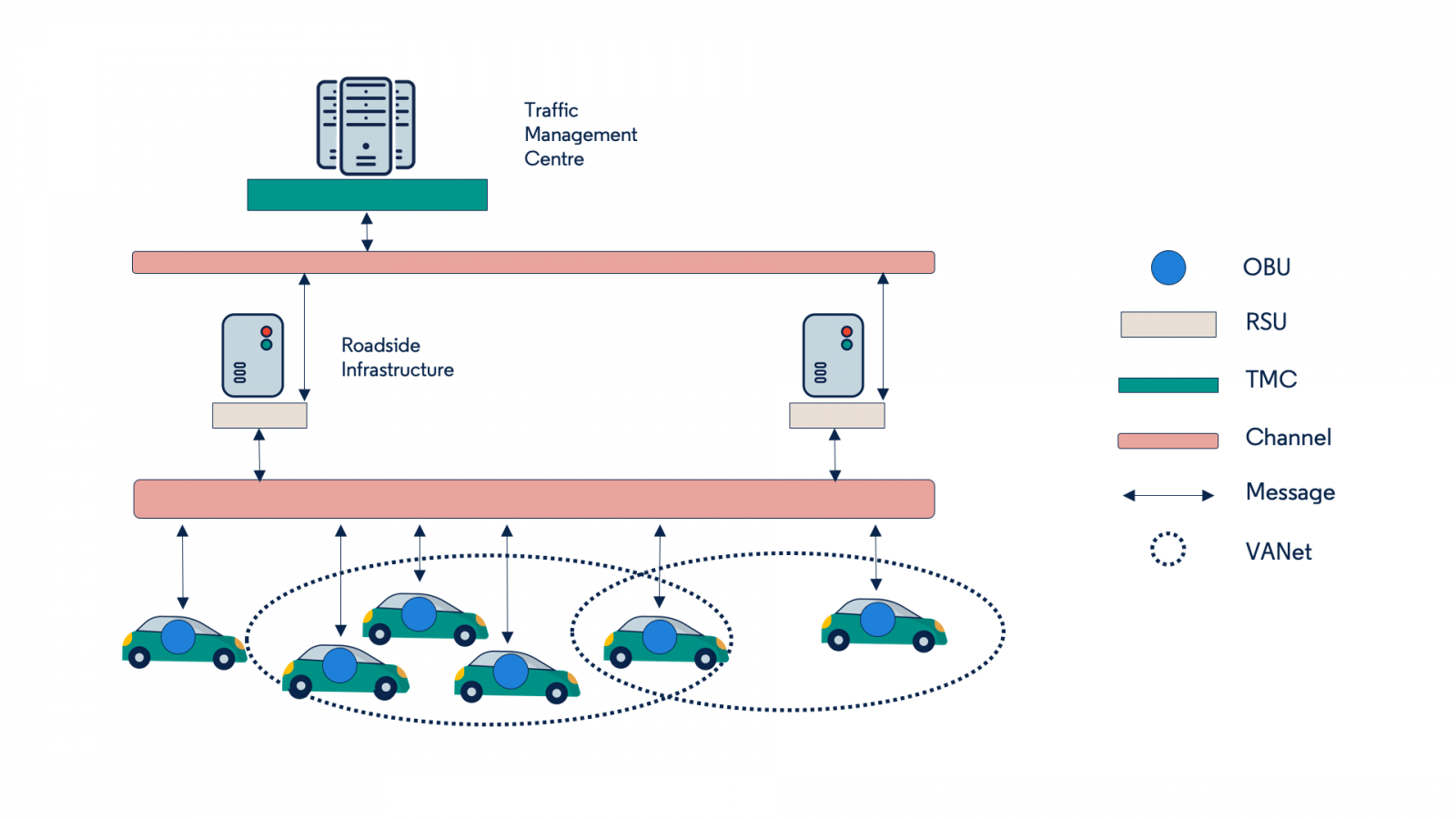 The V2X Software Development Kit (SDK) provides an extensible system in which standardized messages are pre-programmed and to which new, experimental protocols may be added. Simple communications channels, with a range and a stochastic probability of latency and packet loss, exchange the messages between on-board units (OBU) in the vehicles and roadside units (RSU) at fixed locations. The messages received by the units can be used as inputs to rules engines, which influence the management of the traffic network or the actions of each vehicle according to the data received.

Aimsun Next fits right in with your existing software and can exchange data with the most popular CAD, GIS, transport modeling, signal optimization and adaptive control software tools.

Aimsun Next works with most other planning, signal optimization and adaptive control software. Aimsun Next can import data from CAD, CONTRAM, CUBE, EMME, GIS, PARAMICS, SATURN, Synchro, TransCAD, VISSIM and VISUM, which eliminates a lot of unnecessary editing of network and demand data.

The traffic control interfaces provide links to dynamic signal control systems so that their algorithms may be incorporated into a simulation and the signals set in response to the conditions on the traffic network.

Aimsun Next has interfaces to LISA+, SCATS, Siemens UTC System (with SCOOT), UTOPIA, and VS-PLUS, which enable accurate emulation of adaptive control.

The users of Siemens controllers (sX and C900) can create a new model by seamlessly exporting data from Sitraffic Office, including the traffic network, the signal controls, the traffic demand and public transport demand, and the pedestrian network. With Aimsun Next, they can test how the PDM logic responds to traffic actuations.

Aimsun Next works on macOS, Linux Ubuntu, and Windows.

For unbeatable speed. 64-bit: capable of handling very large models that can be built upon and added to.

When it comes to expandability, Aimsun Next is second to none. Make Aimsun Next your own using familiar industry standards such as Python and C++ in different ways:

Aimsun Next gives you the ability to create scenarios with different options of network topology, transport demand, signal control and public transport schedule, which provides an efficient method of generating multiple variants of a traffic model, all in one file.

Geometry Configurations allow you to code each project as a set of network changes that can be activated, individually or in combination, with a single mouse click.

Network Revisions allow multiple modellers to work independently on separate areas of a single network and to update the base network with their changes, removing the need for multiple copies of the same model.

Network Revisions and Geometry Configurations are part of the move away from throw-away, one-use models to the maintenance of a base model that you can use again and again for operations analyses.

The Evolution of Aimsun Next

Model pedestrians, bicycles and the interaction between passengers and public transportation!