Enriching Aimsun Next simulations with the Advanced Programming Interface (API)

What is the Aimsun Next API?

The Aimsun Next API is a collection of functions, in Python or C++, that let you read information and perform actions during a mesoscopic, microscopic or hybrid mesoscopic-microscopic simulation. With the API, you can make changes while the simulation is running whereas with scripting, you have to make any changes before the simulation starts.

Where to use the Aimsun Next API?

In both mesoscopic and microscopic simulations, you can:

In a mesoscopic simulation, you can:

Example: implement a Connected Vehicle application by controlling the vehicles via API

In the following example we will use API to control the speed and the lane of the vehicles approaching a merge. This represents a very simple (probably simplistic) implementation of a cooperative merge application for Connected Vehicles. 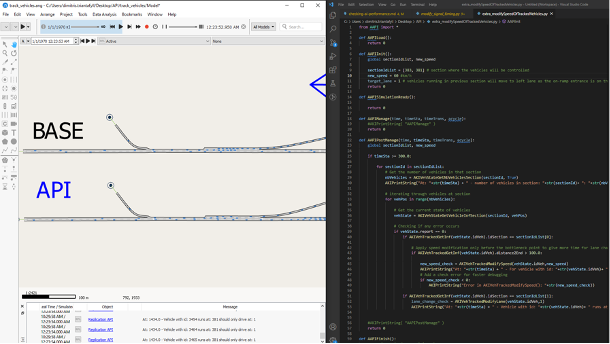 Step 1: We set all vehicles entering the section upstream of the merge as tracked so that we can modify their speed and target lane when needed. This is accomplished by calling the function

Step 2: At every simulation step we get the number of vehicles on the selected sections using the following function:

Step 3: Then we read the state of those vehicles using

Step 4: Next we modify the speed of the vehicles upstream of the merge with

Step 5: In the section of the merge, we set the leftmost lane as target lane by calling

Note: Remember that the Aimsun AAPI file must be consistent with the Aimsun version currently in use. You can retrieve it here:

License: Note that you need an API license to run this example. For more information, please contact info@aimsun.com 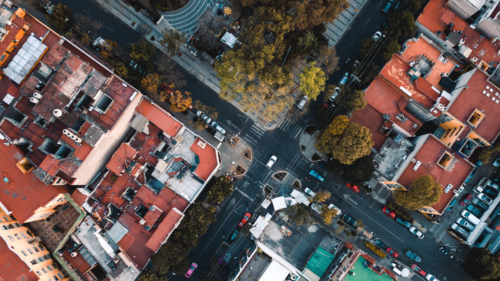