For the Queen Elizabeth Olympic Park study, the main objective was to investigate the quantity of pods required in order to provide the appropriate level of service.

The team investigated how the results of the optimized solution could be used to support a business case for a pod service at other locations.

The site provided a large-scale test area of approximately 160 hectares with a selection of local origins and destinations that could be serviced by an on-demand pod, with scope for route choice (allowing optimization of pod routes). Destinations include: London Aquatics Centre, Copper Box Arena, London Stadium, the Velodrome and Here East.

While the overall pod route is principally off-road, there are some locations where the pod would interact with other vehicles at signalized junctions and on the wider highway network, where the pod could be tested at higher speeds, while limiting interaction with other users for safety purposes during testing. Walking times from the South to North extents are up to 30 minutes, giving potential for pods to provide an alternative to walking.

Driving amongst human driven vehicles only occurs in the north east corner of the network, where one of the pod stops is on a bus route through Here East.

The team’s first job was to build the model of Queen Elizabeth Olympic Park by importing an existing model from third-party software, enhanced and updated for the purpose of the study, which was conducted as part of the Capri project.

Capri was a pilot project that includes the design, development and testing of connected and autonomous pods. The aim of Capri was to build passenger, regulatory and market trust in autonomous pods as a practical, safe and affordable way to travel. Aimsun’s role in Capri was to use simulation as a pre-deployment tool for assessing the feasibility of a pod service. Aimsun developed a methodology for testing deployments at any scale, and by varying parameters could offer optimized system delivery.

The Aimsun Ride solution provided evidence to support the proposed autonomous pod service. The evaluation proved that a streamlined service would reduce initial costs (fewer pods required) but still provide a good SLA to the end consumer. The use of the pre-deployment tools provided accurate data to support a business case and investment decisions.

Simulations also provided clear visualization of how the system might work for nontechnical decision-makers.

Aimsun Ride was used as a stand-alone application to explore POD service design: as demand varies both spatially (in terms of the origins and destinations of the requests) and temporally (in terms of the time requests are made) the site layout must provide sufficient capacity for pods to make pickups and drop-offs for users across the network. It is also important to ensure that pods do not pool in one part of the network during service.

Challenges that impacted the feasibility of pod deployment included: low speed limits in pedestrianized parts of the park, limiting the total number of requests that a pod can fulfil; sub-peaks in demand during the main peak hour resulting in demand outstripping pod supply; a high level of service from the pods, requiring the pods to have a low average time utilization during the peak hour, so that vehicles are available to serve all requests during the hour. 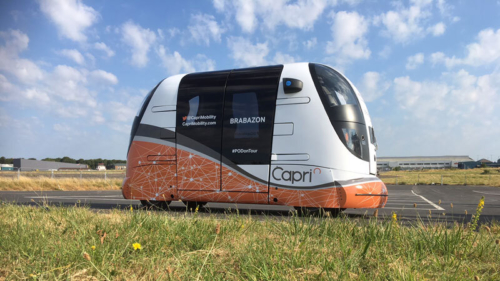 For this project the modeling team developed a model of Bristol Airport to demonstrate the benefits and prove the business case for an autonomous pod on demand (POD) shuttle service, over and above the existing shuttle bus service available on the site.