To assess the effectiveness of Aimsun Live in predicting traffic conditions up to 60 minutes into the future and analyze how likely traffic jams could be prevented or mitigated. The overall aim was to improve the general response to issues on the network.

The output of the project needed to include identification of any data that might be required to make the system more accurate, along with any other further improvements.

The pilot project ran across a small area of the Gold Coast running approximately 10km along the M1 Pacific Motorway, and east until 4km from the coast. This made up around 20% of the entire Gold Coast area. Real time data was gathered using existing traffic counting devices on the road network.

Aimsun used live traffic information and transport models to predict traffic conditions up to 60 minutes into the future.

Aimsun Live was run during the weekday morning and afternoon peak periods, 6am-10am and 3pm-7pm.

This project was designed to understand the scope and value of the technologies and there was no integration back into live traffic management systems.

Models were used to produce Origin-Destination (OD) trip tables that were supplied as inputs to the simulation models which were used to simulate the behavior of individual drivers in response to various control strategies on the corridor and at junctions such as freeway interchanges or arterial intersections.

Aimsun software engineers identified a range of scenarios and then a number of mitigation strategies that could be implemented in order to minimize the effect of an incident or build-up of congestion. In each case the “do nothing” scenario was included to ensure that any mitigation did not make the traffic situation worse.

The customer understood the value of predicting traffic in the near term in order to understand mitigation strategies that could be implemented based on a traffic situation that was accurately predicted but had not yet taken place.

Limitations in the intelligent transport systems used, including consistency between sensors and the model were also identified, leading to maintenance and upgrading to be addressed before taking the trial live.

The project also identified what extra sources of data may be required.

There was excellent collaboration between Queensland Department of Transport and Main Roads, and Aimsun. They worked together to define a trial area which would give an indication of the value of the system in an affordable and manageable way. Both teams were quick to share data and had a can-do attitude.

The project used existing sensors and did not require any extra hardware to be installed. 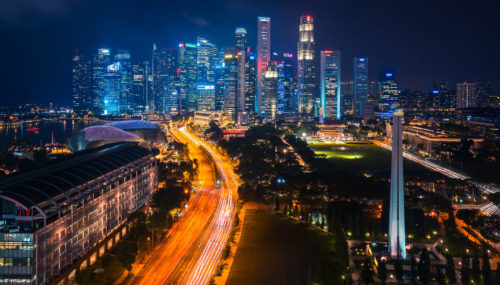 Aimsun collaborated with the Land Transport Authority of Singapore (LTA) to develop a real-time traffic simulation and predictive system in Aimsun Live.