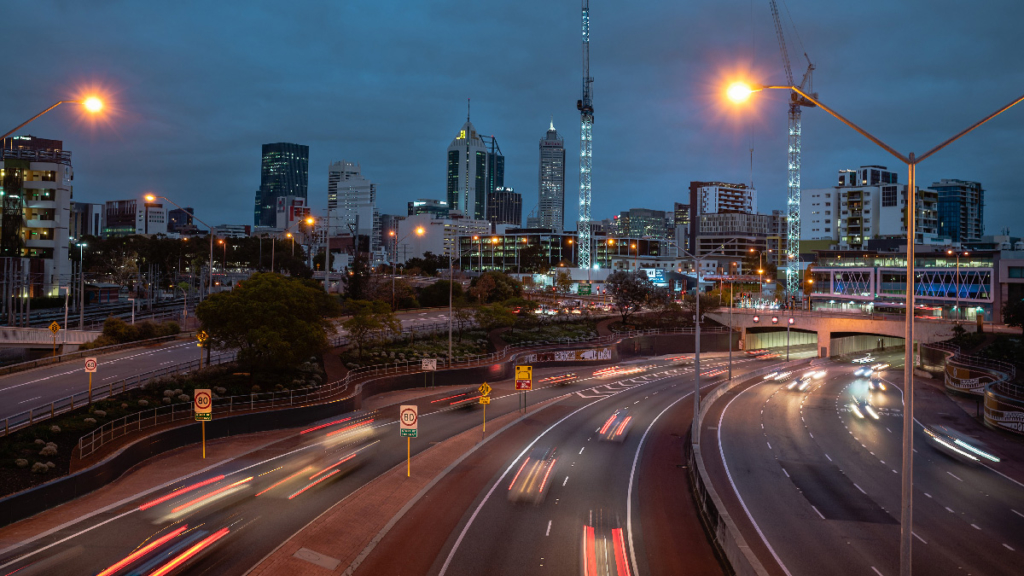 In our previous project (Improved network performance prediction through data-driven analytics and simulation), we numerically simulated perimeter control (gating) based on macroscopic fundamental diagrams (MFDs). The results demonstrated the benefit of gating and how the Perth road network could be optimally divided into multiple zones for this purpose.

As the next step towards operationalising it in Perth, this project aims to extend the work by more detailed simulation of traffic behaviour and gating strategies.

It will produce better estimates of the potential benefits and effectiveness of the MFD-based controllers and enable Main Roads to make informed decisions. It will pave the way for an actual trial if the estimated benefits are significant.

Perimeter control (also known as gating) works by dividing the network into multiple zones and regulating their flow exchange at the boundaries. It aims at load-balancing between zones across the network to achieve a stable and optimum operation at the global level.

Controllers prevent overflow of traffic into busy zones by leveraging spare capacities in less busy zones as temporary storage space. This contrasts with local congestion relief strategies that focus on individual pinch points, which can result in pushing too much traffic downstream and creating another bottleneck. The basic idea is similar to ramp-metering, but expands it to the whole network.

By keeping the whole network at a steady state, gating has the potential benefit of maximising the total productivity and reducing the need for local capacity expansions. However, its effective implementation requires a good understanding of the behaviour of each zone. Macroscopic Fundamental Diagrams (MFDs) are commonly used for such purposes. They describe underlying relationships between a zone’s speed, flow and density at the aggregate level.

The accurate measurement of MFDs has become possible in recent years with the advent of ‘big data’. As Main Roads’ Network Operations Directorate is making rapid progress in this space, the feasibility of implementing perimeter control becomes increasing likely.

MFD-based perimeter control is a potential paradigm shift for network operations, and it can maximise the productivity and reliability of the whole network by utilising spare capacity in zones with low demand-to-capacity ratio to alleviate stress for those under high demand. The productivity gain and avoidable cost of unnecessary road expansions could generate significant social, economic, and environmental benefits.

In our previous report Implementing Multi-Zone Perimeter Controls on Perth’s Road Network we have theoretically shown the benefit of applying perimeter controls based on MFDS, and how the Perth road network could be optimally divided into multiple zones for this purpose.

This project aims to extend the work with more detailed modelling of traffic behaviour and gating strategies. It will produce better estimates of the potential benefits and effectiveness of MFD-based controllers and enable Main Roads to make informed decisions on whether an actual trial should be conducted.

Its main objectives are:

Ongoing, this page will be a living record of this project. As it continues, matures, hits milestones, etc., we’ll add information, links, images, interviews and more. Watch this space!

Link to the original article here