Normally, traffic simulation takes a backstage role in urban planning projects, but one Paris traffic study has received an unusually high level of recognition thanks to the Champs-Élysées exhibition at the Pavillon de l’Arsenal in Paris. As part of the installation by PCA-STREAM architects, our Paris model showed the impact of possible future scenarios for the Champs-Élysées avenue, showing how people-centred urban design could put the charm back into the « most beautiful street in the world » without negative side effects for mobility. 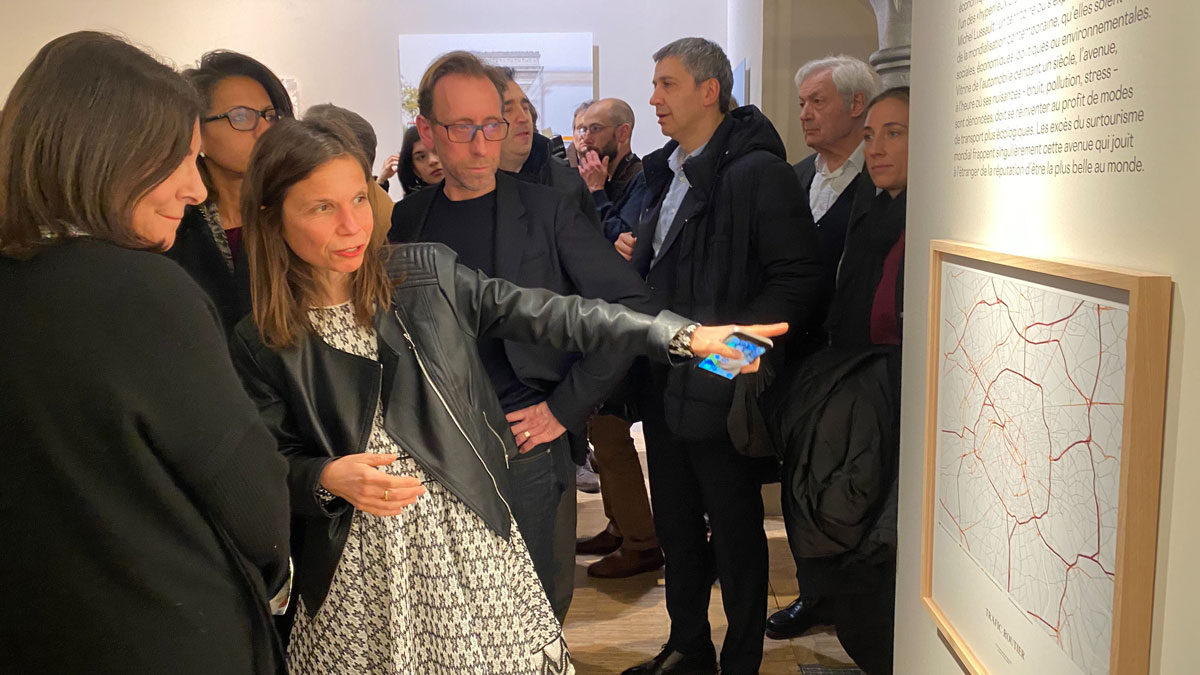 At the inauguration on February 13th, the mayor of Paris, Anne Hidalgo, toured the installations showing the past, present and possible futures of the avenue. Our congratulations to PCA-STREAM, Philippe Chiambaretta, the Comité Champs-Élysées, and the whole of the Aimsun France team, particularly Jean-Nöel Diltoer. The exhibition runs until May 10th.

This model integrates vehicular traffic over the entire Île-de-France region, both in metropolitan Paris and the suburbs, and also goes beyond the region, thus making it possible to accurately model exchange and transit traffic on a macroscopic level.

The building of a baseline scenario made it possible to calibrate vehicle behavior throughout the study area using the available count and travel time data sets. In practice, this meant careful calibration work to reproduce the real-life levels of traffic, particularly at very busy, complex intersections such as Place de l’Étoile or Place la Concorde.

The next stage was to design a reference scenario with all the urban improvements that the City of Paris plans to carry out by 2025. Examples include the Plan Vélo (bike sharing plan), the project to extend line T3 between Porte d’Asnières and Porte Dauphine, and the redevelopment of the Quays. This reference scenario also incorporates the assumptions for changes in travel demand based on observations and analysis of traffic trends by the City of Paris.

The reference scenario creates a projected situation in which all the impacts due to changes in road supply and travel demand will be taken into account when the project under study is commissioned. These changes generally result in traffic shifts at varying scales that will of course be built into the model.

The last step is the project scenario, which includes all the assumptions of the reference scenario and adds those of the project, inlcuding the redevelopment of the roadway on Avenue des Champs-Elysées, Places de l’Étoile and Concorde or the closure of the Alexandre III Bridge and Winston Churchill Avenue. The choice of relevant traffic indicators and their comparisons between the baseline and project scenarios made it possible to precisely identify and quantify the impacts.

“Reenchanting the Champs-Élysées” is an ambitious project in view of the traffic issues that the Avenue represents today. It is in line with the Plan Vélo in reducing the Champs-Élysées avenue from 3 lanes per direction of traffic to only 2 lanes per direction of traffic. The space freed up is thus reallocated to other modes of transport, including soft modes such as pedestrians and bicycles. The project adds significant modifications to Place de la Concorde, Place de l’Étoile and in particular the closure of Winston Churchill Avenue and the Alexandre III Bridge. All its modifications generate an overall decrease in traffic between l’Étoile and Concorde due to the decrease in road capacity.

The reduction of space for motorized modes on the Avenue results in a significant reduction in the number of vehicles using the Avenue des Champs-Élysées, which fluidifies traffic and reduces the travel time on the Avenue by about one minute, from a 6-7 minute trip from the Étoile to the planned Concorde to 5-6 minutes and the same for the opposite direction.

The model shows a marked decrease in traffic on the Avenue, ranging from 20% of the traffic to 40% on certain sections: 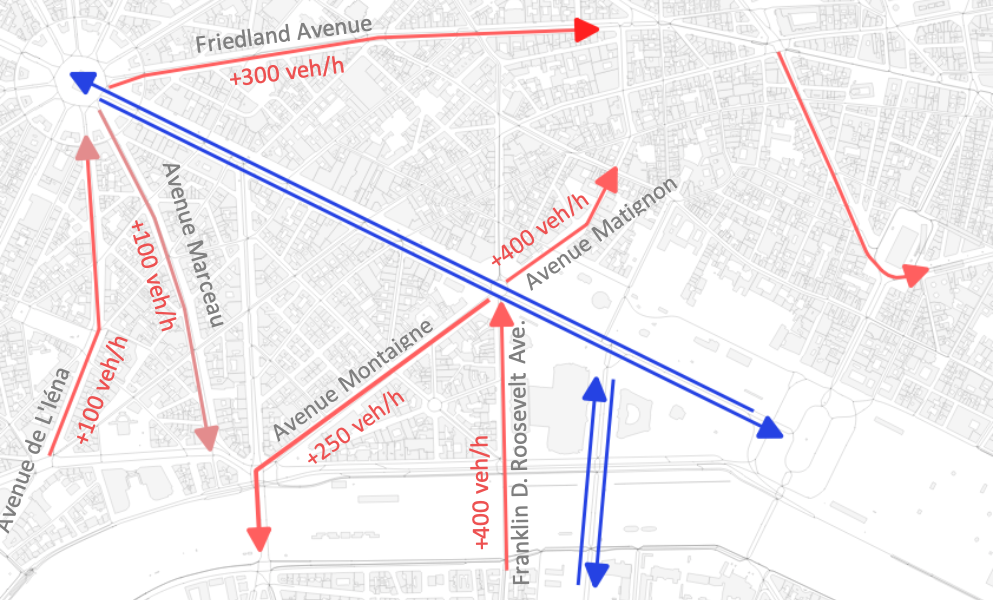 Place de l’Étoile and Place de Concorde are the gateways to our study area, with nearly 4,000 vehicles per hour in transit on each of them. In spite of high flows, the proposed changes do not cause congestion and traffic remains fluid from 15:30 – 20:00h.

Finally, we compared traffic conditions between the two scenarios. A few black spots were noticeable in the reference scenario and only got worse in the project scenario.

Traffic conditions in the project scenario (2025)

In conclusion, the development makes it possible to maintain a fluidity of traffic on the Avenue des Champs-Élysées as a whole with more room for soft modes. Of particular note is the pedestrianization of Franklin D Roosevelt Avenue, which has downstream impacts on the city’s many bridges as far as the ring road, but not beyond.

Nevertheless, the developments generate several points where traffic levels are degraded and will have to be monitored, particularly on Avenue de l’Iéna, in both directions of traffic, as well as the Place de l’Alma and access to the Champs-Élysées from Avenue George V. With the exception of the few black spots, traffic conditions in the sector are as good as in the baseline scenario.

In general we concluded that the results show that the Champs-Élysées project is sustainable from a traffic point of view in view of the degradation of the flow conditions in the study area, which remains acceptable.