Taking the micro to the macro: scaling impact assessment of connected and autonomous vehicles 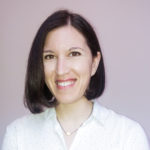 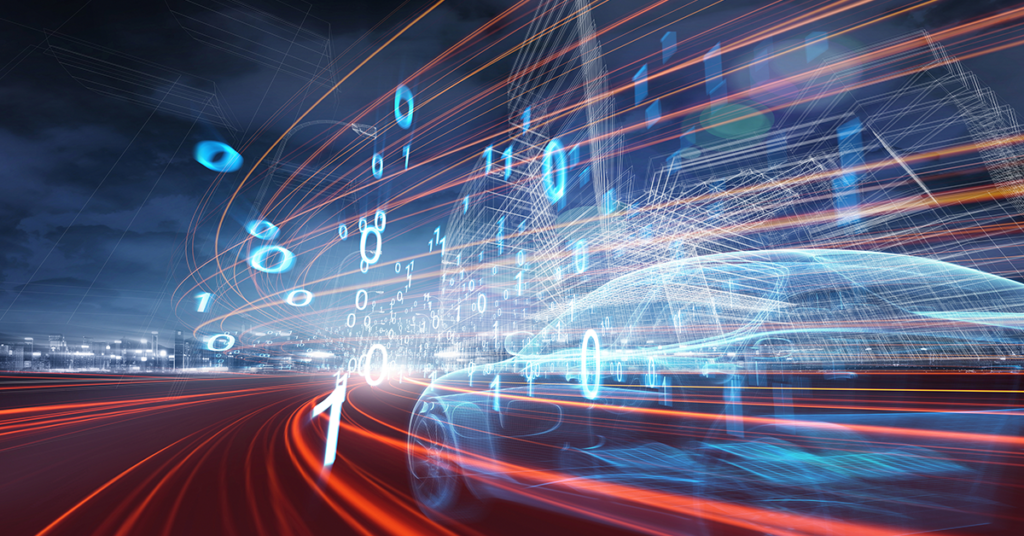 How can we represent microscopic simulation results at the macroscopic level? One way is by use of the Macroscopic Fundamental Diagram (MFD) concept, which Aimsun has been progressing within the H2020 LEVITATE Project.

In the last few years, the modelling community has increasingly found itself in the enviable position of being able to undertake more and more runs with larger and larger models, in timescales that would have been quite impossible even five years ago. However, much like traffic, simulation expands to fill the space available: There are many situations where we might want to investigate topics using the level of detail available in micro models, but we have insufficient resources or time – maybe the city is too large, we need too many replications, or quite simply, the parameter space of the situation under investigation is too large.

An aggregated approach for traffic modelling and control that can help us in this is the network Macroscopic Fundamental Diagram (MFD) technique. The approach is not new and has been around for 10 or so years, being used in studies, such as perimeter traffic control (1), modeling and control of urban traffic emissions (2) as well as validation of microscopic simulation models (3). One new application however, is the use of the MFD method for the identification of capacity implications of Autonomous Vehicles (AVs) and this is something we have been examining over the last year within the H2020 LEVITATE project. Here, the capacities for autonomous vehicles (AVs) and for mixed traffic composed of both autonomous and conventional vehicles can be easily derived from the network MFD, independently of the specific modeling assumptions of AVs and network characteristics.

The approach for assessing and quantifying the impacts of AVs with respect to the network performance includes the following steps:

2.     Statistical analysis for the identification of the effects on the Passenger Car Unit (PCU) as a relative change of capacities between different AV penetration rates and conventional vehicles. A functional relationship between the PCU factors and AV penetration rates is estimated.

3.     Finally, the PCU relationship is provided as input to the VDFs of macroscopic demand models to forecast the potential macroscopic implications on the network performance induced by different AV penetration rates.

The method allows quick and easy investigations to be performed, with the estimated PCU relationship as a function of the AV penetration rate expected to be robust and transferable to different networks, under similar AV modeling parameters. The framework can be used as a complete process from microscopic simulation to macroscopic analysis or different levels of the method can be performed. For example, if a microscopic simulation model of a city is not available, the generalised PCU functional relationship estimated from a different network could be used as input into a travel demand model to forecast the macroscopic impacts.

Our analyses so far have allowed us to look at network impacts in several cities such as those shown in the figures below. While the method looks promising there is still more work to be done to investigate the following points:

A. What effect do multimodal systems (incorporating public transport, sharing the infrastructure with cars) have on the macroscopic network performance impacts? (4)

B. Can the methodology be adopted for the analysis of network-wide emissions?

C. Can and should the networks be partitioned if there are heterogeneous characteristics present, to obtain well-defined MFDs? (5)

These are important questions if the use of this promising technique is to grow, and we hope to bring you our findings soon. 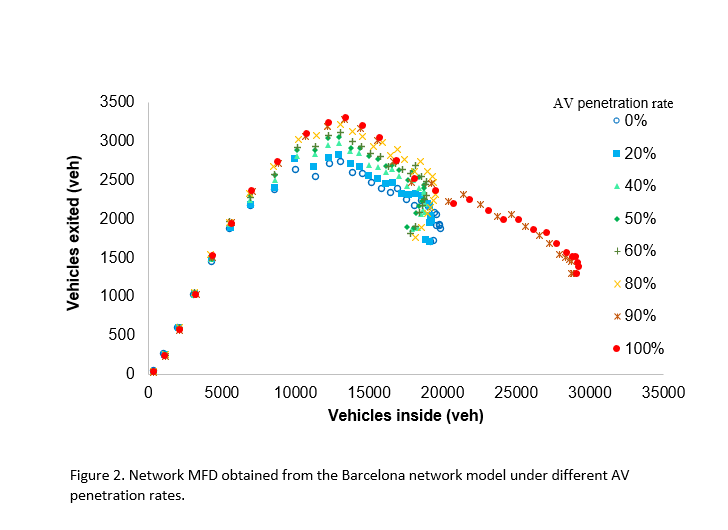 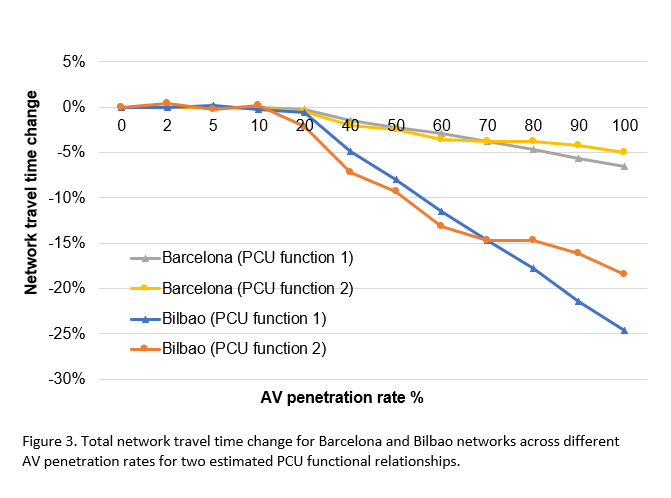