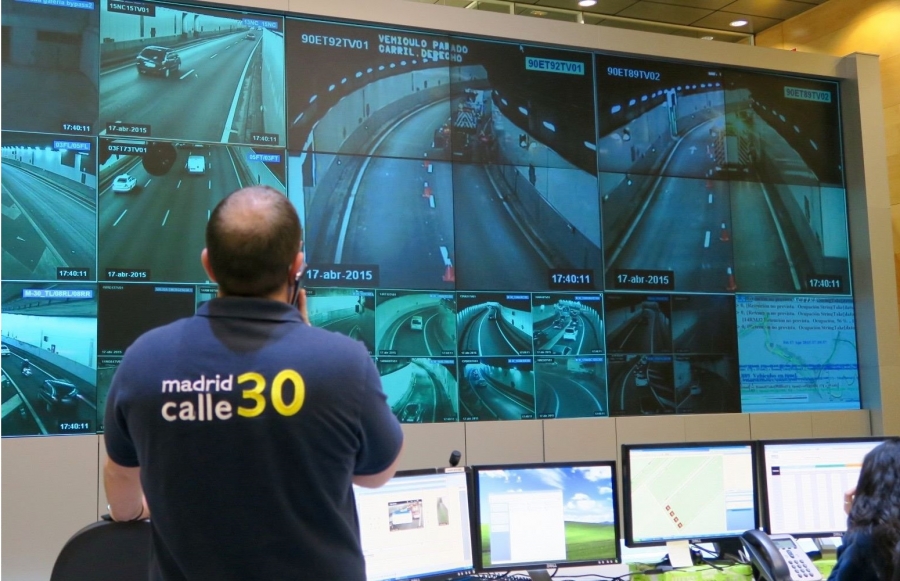 Develop and implement a simulation-based traffic forecasting system for an advanced traffic management operation in the Madrid traffic control center as part of the Calle 30 project.

Madrid’s newly opened M-30 urban highway had a significant number of tunnel sections (including, in fact, the longest urban tunnel in Europe) and was subject to many safety considerations, with various traffic evacuation and rerouting responses for incidents. Madrid needed a tool capable of anticipating the consequences of these actions on the network over the following 30 minutes in order to choose which set of actions could support these safety measures efficiently while minimizing the impact on the rest of the traffic.

Live traffic measurements were fed into Aimsun Live, allowing it to deduce the current traffic status on the streets and the actual demand (modeled as an origin-destination matrix). With control plans changing dynamically during the day, Aimsun Live also read the current control plan operating at each network intersection.

M-30 safety actions as well as any other incidents previously detected and still existing were loaded into the simulation model before starting the parallel simulation runs. Each simulation considered a concrete strategy that might be applied in order to improve the network situation compared to the “do nothing” scenario. Currently 4 different strategies can be simulated simultaneously but this is merely a software limitation and can be increased if greater computing power is available.

Within 1-2 minutes, Aimsun Live provided a summary of results to the operator including snapshots of predicted traffic congestions and performance indicators. These results allowed the operator to quickly see if any strategies could improve the situation and which was the best of these alternative. Once a suggested solution was accepted, a single validation click on the screen led to the field application of the selected set of actions – such as lane closure, rerouting with VMS, speed limits variation or ramp metering – that could either be activated manually or under detection triggers. To decrease the operational time, most of the management scenarios are already implemented in the simulation model (within a scenarios catalogue) and are activated when the performance of a particular scenario has to be assessed through simulation.

An off-line operated module allows the prediction capabilities of the simulation to be evaluated each day by comparison with real data stored during the day, offering Madrid City Council confidence in the accuracy of the model.